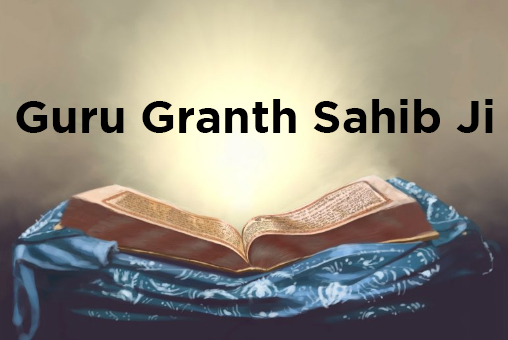 The devout task of installation of Shri Adi Granth was done by Shri Guru Arjan Dev ji Maharaj. The immaculate and elevated bani of four Guru Sahibs expressing divine love in the form of two pothis was in the possession of Baba Mohan ji in Goindwal.  Guru Arjan Dev ji initially sent Bhai Gurdas ji and then Baba Buddha ji but he refused to hand over the Pothis to them. Guru Sahib himself went to Goindwal and recited a Shabad in Gauri Raag sitting in the foyer of Baba Mohan ji.

Listening to this melodious Shabad in the passionate voice of Guru Sahib Baba Mohan ji got happy and felt by giving pothis to Guru Sahib he will be placing them into the right and safe hands.

In 1604 Guru Arjan Dev ji installed Shri Adi Granth Sahib ji in Darbar Sahib after accomplishing the task of compiling it with the help of Bhai Gurdas ji at the pious place of Ramsar Sahib in Amritsar and Baba Buddha ji was appointed as the chief Granthi of Shri Harmandir Sahib. In the Adi Granth he included bani of five gurus including his own and fifteen bhagats. These bhagats belonged to different regions of India and also to different faiths and walks of life but they all had deep devotional divine love in common. Guru Sahib included their spiritual experiences and their ardent divine love in the form of poetry in Shri Guru Granth Sahib without any discrimination. The bani of 11 bhatts and 4 gursikhs who had earned and lived the values of Sikhi is also included in Shri Guru Granth Sahib ji. By including the poetic ditties of devotees belonging to different regions, tribes and faiths Guru Sahib gave the message of equality, universal brotherhood and emphasized on the message of ek pita ekas ke hum barak.

The bani of Shri Guru Granth Sahib ji gives the message of Ek noor te sab jag upjeya, Kaun bhale kaun mande to the whole humanity. It inspires us to live a life full of virtues and high moral values to become a denizen of Begampura, which is actually a high elated state of mind when you start feeling the presence of the Almighty Waheguru everywhere and in everyone. When one reaches the state of Begampura the pain and sufferings vanish and bliss fills the mind and body and the vices depart. In Begampura everybody seems to be equal and the creation of the divine and one reaches the state of

Dhom N Saem Eaek So Aahee ||    There is no second or third status, all are equal there.

Guru Sahib not only preached equality but also put equality into practice by including the divine experiences of all devotees equally in Shri Guru Granth Sahib. The bani of Shri Guru Granth Sahib ji is adorned in different raags and organized in a pattern so that in future nobody can interfere and change this divine ordain.

After Guru Arjan Dev ji Dhir Mal, son of Baba Gurditta and grandson of Guru Hargobind Sahib ji who had the possession of the Adi Granth refused to give it to Guru Gobind Singh ji. Guru Gobind Singh ji at Damdama Sahib at Guru ki Kashi district Bhatinda through his intellect and memory dictated Guru Granth Sahib ji to Bhai Mani Singh ji and also included the bani of Guru Teg Bahadur ji. In 1708 he instituted Guru Granth Sahib ji as the eternal Guru of Sikhs.

Guru Ramdas ji has emphasized on the importance of Gurbani in Gauri Raag and has explained that Gurbani is the command of Almighty Waheguru and is actually a manifestation of Waheguru.

Guru Arjan Patshah has given utmost respect to Gurbani by calling Gurbani as Dhur ki bani.

The bani of Guru Granth Sahib ji is a message of truth and universal brotherhood for the whole humanity. It gives the message of equality and love. It teaches us to be contented and happy in Almighty’s Hukam (command) and to live a life of purity and high character. It is a constant reminder to our mind of our real purpose in life to connect with Waheguru through Naam and experience that divine love which is around us and in us. We need to decipher it and experience it to achieve the euphoric state of Anand to make our life successful and blissful.

This Page Is Created For Informative Purposes And Is Opinion-Based. Our Intentions Are Not To Offend Or Upset Anyone. If You Believe This Is The Case, Please Share Your Feedback And/Or Suggestions By Emailing Us At info@sikhwisdom.org. Thank You.
Share on facebook
Share on twitter
Share on linkedin
Share on whatsapp
PrevPrevious articlePaap Karedhar Sarapar Muthe
NextSikh Question and Answer PlatformNext 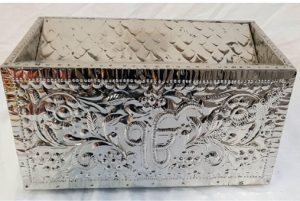 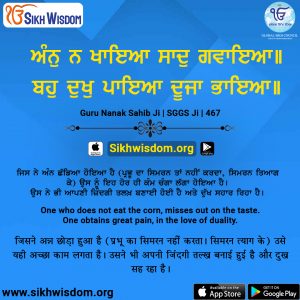